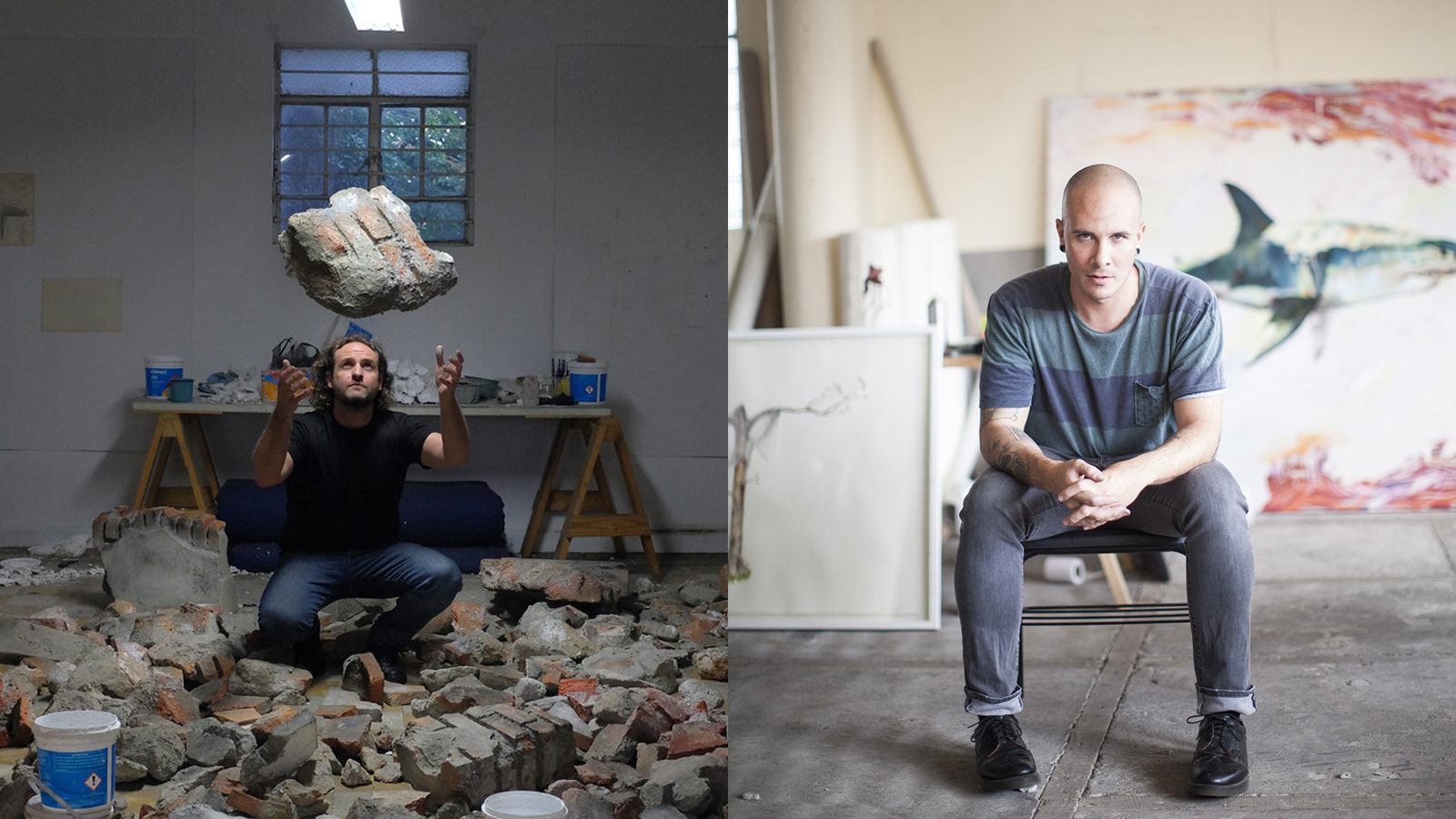 The
unfolding
of old
myths
and
history

Marcos Castro unfolds a kind of stage set on the walls and within the space, inspired by traditional Mexican mural painting. He reflects on Mexican post-revolutionary thought by reinterpreting elements of official historiography, creating hybrid graphic relationships from extended painting and borrowing symbols from various cultures – from the Mexica tradition to Mexican punk culture.

Mauro Giaconi deploys an installation in the space based on anecdotes about the Mexican Revolution and the use of illusion as a strategy to alter perceptions of reality in combat. Using wooden stakes, flour, water and heat, he occupies the space like a battle array, provoking a scenario of symbolic and historical intersections presented in a surreal landscape of hybrid relationships between revolutions, anarchy and bread.

Marcos Castro (*1981 in Mexico City) studied Fine Arts at the National School of Painting, Sculpture and Graphic Arts ‘La Esmeralda’ in Mexico City. He has already had several solo exhibitions in Mexico, the USA and Europe and has been represented in numerous group exhibitions internationally. His work is part of various renowned collections in Mexico and the USA, including the Museum of Modern Art in Mexico City. In 2007 and 2014, Castro received the Young Artists Grant from the Mexican government’s National Fund for Culture and the Arts (FONCA). In 2008 he participated in the 18th Street Arts Center in Los Angeles, and in 2014 he was selected for the Omi Residency in New York. In 2016 he held an artist residency in Skowhegan, Maine, USA, and in 2018 the Dedazo residency in the Ejido Felipe Carrillo Puerto in Chiapas, Mexico. Castro’s work is heavily influenced by traditional Mexican murals, but also shows influences of neo-expressionism as well as a contemporary gothic or punk aesthetic. His paintings, drawings and sculptures draw on a variety of symbolic elements and aesthetic codes of Mexican identity. By deconstructing patriotic symbols or reinterpreting various historical events, from pre-Hispanic history to the 1968 movement, Marcos Castro succeeds in questioning deeply rooted myths as well as official historical and nationalist discourses.

Mauro Giaconi (*1977 in Buenos Aires, Argentina) completed his art studies at the National Art School Prilidiano Pueyrredón in Buenos Aires. He has lived and worked in Mexico since 2011. Giaconi was a fellow of the Buenos Aires Artistic Research Center (CIA), a fellow of the Bemis Center for Contemporary Art (Omaha, USA), the Skowhegan School of Painting and Sculpture (Maine, USA), the Omi International Art Center (New York, USA) and the Solentiname Art Residency (Solentiname, Nicaragua). His works have been shown in solo exhibitions in Latin America, the USA and Europe, and he has also been represented in group exhibitions internationally. Works by Giaconi are in collections such as the SPACE Collection (USA), the Museum of Modern Art in Buenos Aires (Argentina) and the Miami Art Museum (USA). He received, among others, the first prize at the Argentinian Philips Award for Young Talents in 2001 and an honourable mention at the Salon of Drawing and Engraving in Buenos Aires in 2004 and 2006. The starting point of Mauro Giaconi’s artistic works are mainly graphite drawings, which extend to other disciplines such as sculpture and installation. His spatial interventions and images explore formal, historical and cultural characteristics and peculiarities of everyday objects, focusing on the materiality of these elements in order to examine and transform them processually. Giaconi works predominantly with discarded or cast-off objects. Architecture, structure, memory and environment are key elements in the Argentine artist’s work.