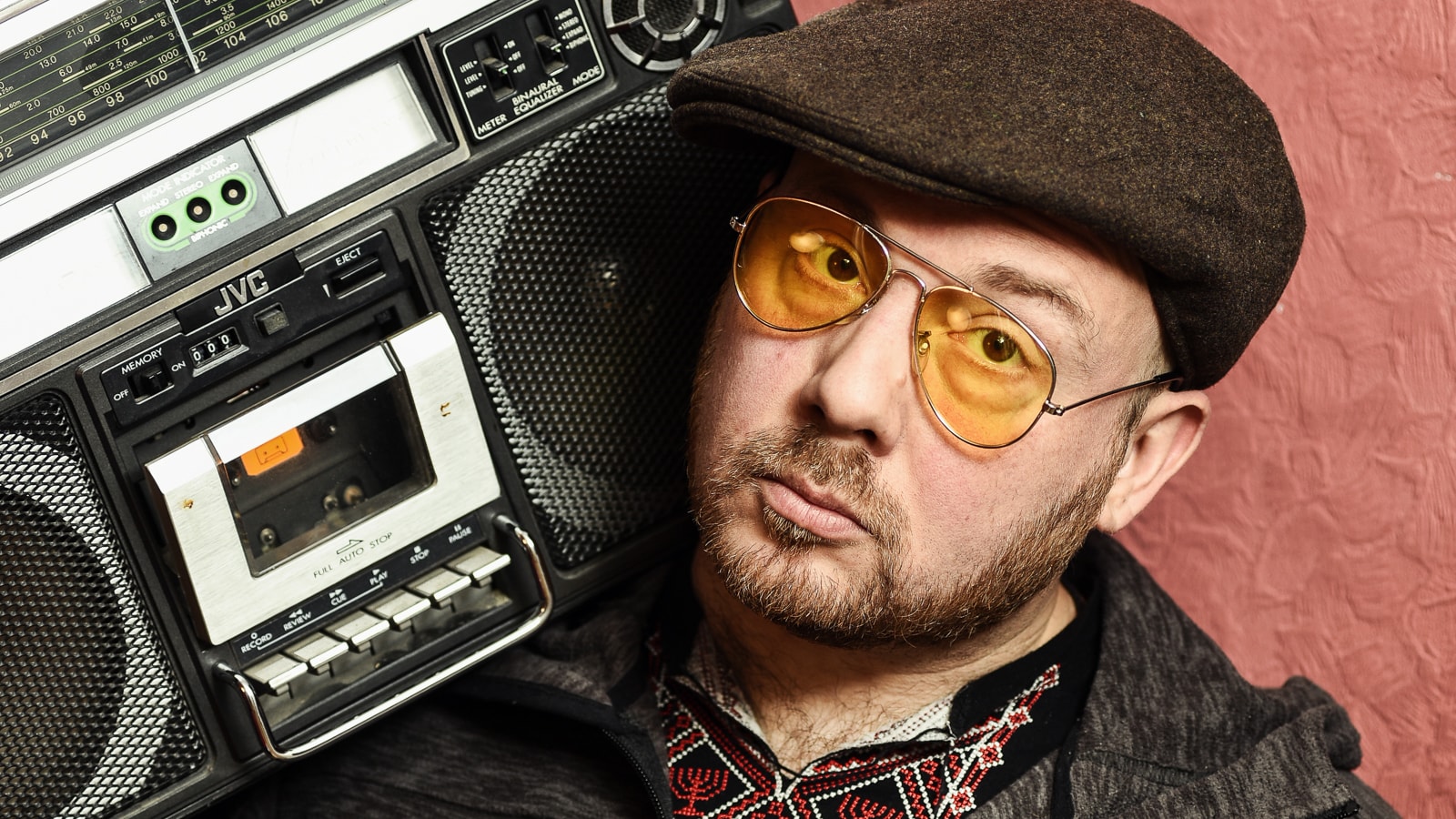 – – –
Event with headphones
The Seebühne at the Schwanenspiegel floats on the water while the audience sits on the terraces at the shore. To connect the audience with the action on stage, a headphone system is used that is newly sanitised before each use.

»
Richard
Wagner?
I would
have
cancelled
him.
«
(Yuriy Gurzhy)

Richard Wagner once wrote inflammatorily that Jewish musicians and Jewish music had no place in German culture. Yuriy Gurzhy counters with a joking book title: “It’s my little revenge to put Richard Wagner and Klezmer together in the title. He wouldn’t have liked that.” The well-known DJ and musician has been searching for the current Jewish sound of Germany since he came to Potsdam from Ukraine with his family at the age of 20. In his first book, ‘Richard Wagner und die Klezmerband’, Yuriy Gurzhy is also first and foremost a DJ, but he doesn’t mix pieces of music together, instead he tells exciting, unusual stories and invites the reader to take a look behind the curtains of an entire scene.

Between smoky Berlin clubs and Frankfurt’s Festhalle, Yuriy has met unusual people – including a rabbi who writes music parodies, a rapper from California whose great-grandfather wrote songs in Hamburg before the war that are still sung there today, a Green Party politician who performs Yiddish songs, a singer who combines Bavarian folklore with Yiddish songs. The voices in this book belong to the people who have directly and indirectly influenced and created the contemporary Jewish music scene in this country. The protagonists range from Yuriy’s old friend and fellow Russendisko host Vladimir Kaminer to trumpeter Frank London, playwright Sasha Marianna Salzmann, musician and actor Daniel Kahn, musician and author Marina Frenk, singer Maya Saban, rapper Ben Salomo and EU Member of Parliament Sergey Lagodinsky.

Gurzhy’s interview partners show how diverse, lively and progressive the German-Jewish music scene currently is. And it’s not just about music, but about all the intricate and crazy life paths, stories and designs of Jewish artists, concert organisers and label makers in Germany.

Yuriy Gurzhy lives in the Prenzlauer Berg district of Berlin. He is a musician, DJ, producer and radio presenter. Together with the writer Wladimir Kaminer, he initiated the legendary party series ‘Russendisko’ and released compilations such as ‘Russendisko Hits’, ‘Russensoul’ and ‘Ukraine Do America’. Already ‘Shtetl Superstars’ (2006) dealt with contemporary Jewish sounds from all over the world. Gurzhy is also active as a singer and guitarist with the Emigrantski Raggamuffin collective RotFront and founded the Shtetl Superstars Band with Lemez Lovas. In 2016, he hosted the Berlin party series ‘Born In UA’, which focused on Ukrainian music, and released the compilation ‘Borsh Division – Future Sound of Ukraine’.

During the pandemic, Yuriy regularly streamed DJ sets from the Panda Theatre in Berlin, as well as releasing the CD ‘Stay at home, Mama!’ with Wladimir Kaminer and their joint new band ‘Kaminer & Die Antikörpers’.

Sponsored by the Ministry of Culture and Science of the State of North Rhine-Westphalia as part of the #Kunststörer project, in cooperation with the zakk – Centre for Action, Culture and Communication in Düsseldorf.