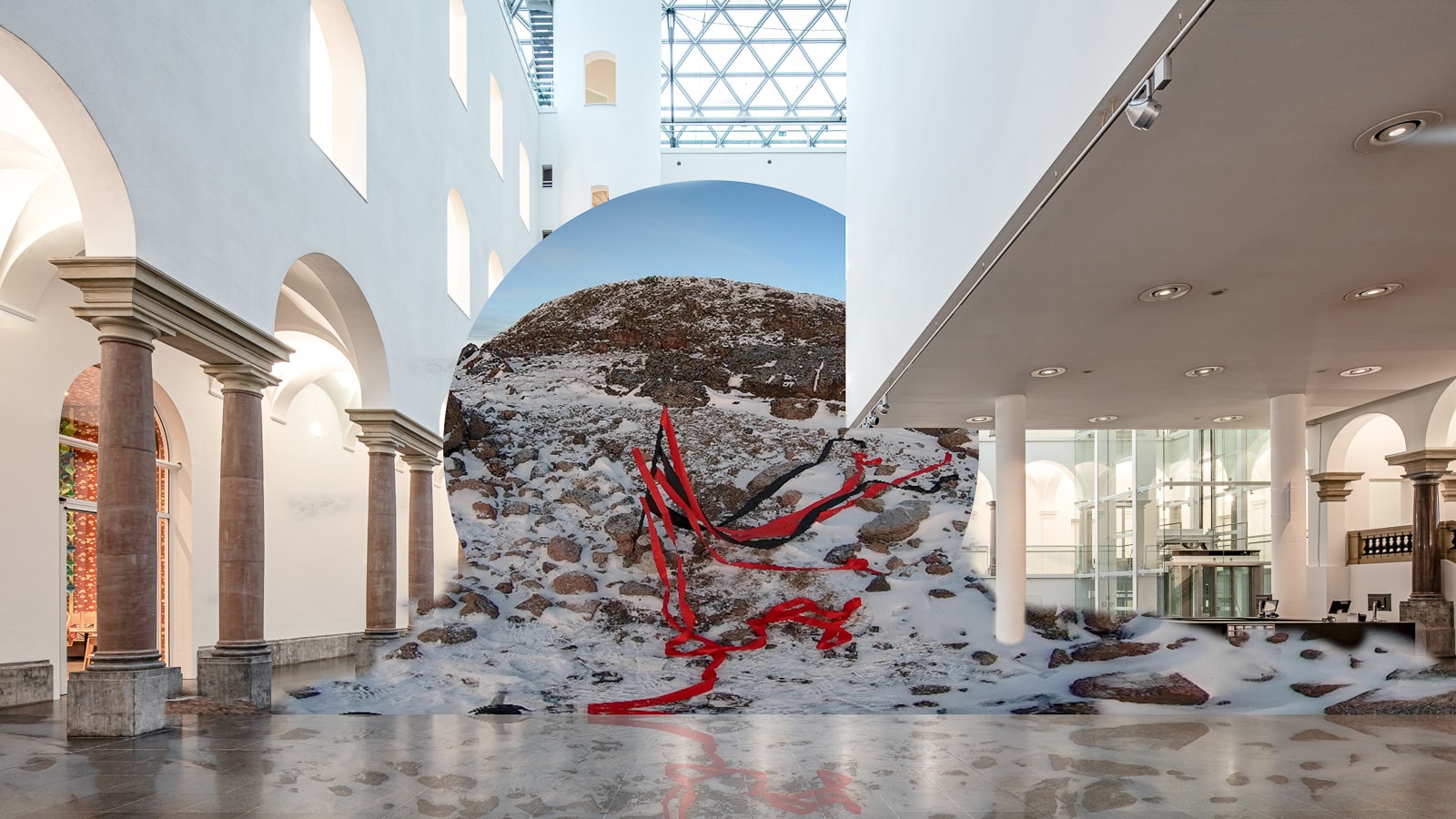 How
to
find
truth
without
evidence
?

The project series ‘Dramaturgy for a Conference’ by the Argentinean artist Matías Umpierrez creates space for thinkers and artists to explore questions of the times together in a performative way. Umpierrez commissioned Einat and Eyal Weizman to write a manual entitled ‘Negative Evidence’, which was given to four performers to develop a performance based on it. The four solo performances were originally to be presented at asphalt Festival 2021, but travel restrictions during the pandemic prevented this. Instead of cancelling the project, the artists developed a new concept for the dramaturgy of a conference in augmented reality, which will now be premiered at asphalt 2022.

The performers each place a specific event at the centre of an artistic work that exposes colonialist structures in their countries of origin. The Inuk performer Laakkuluk Williamson Bathory from Canada, the Xhosa choreographer Mamela Nyamza from South Africa, the Indian performer Mallika Taneja and the Icelandic choreographer Erna Ómarsdóttir follow the path of ‘forensic theatre’ set out in the manual.

The manual is a guide to redefine documentary theatre. Starting points are current documents of the 21st century such as tweets, blogs, photos, articles or videos. It analyses what constitutes a true statement today and whether art can help truth find a new, powerful expression. How do you find truth when there is no evidence? The transfer of the solo performances into augmented reality makes answering this question all the more exciting. The discourse on the perception of colonial power structures initiated in the process gains a special urgency in terms of content and aesthetics through the physical absence of the performers.

During the opening hours of the K21, tablets and headphones can be borrowed free of charge to experience the solo performances as an augmented reality installation. The audience can move around the K21’s outdoor area as well as the piazza and thus enter into a connection between virtual and analogue space.

Laakkuluk Williamson Bathory from Canada is a ‘kalaaleq’ (Greenlandic Inuk) performance artist, poet, actor, storyteller and writer based in Iqaluit, Nunavut. She is known for performing ‘uaajeerneq’, a Greenlandic mask dance that involves storytelling and centers on three elements: fear, humour and sexuality. Laakkuluk describes ‘uaajeerneq’ as both a political and cultural act and an idiosyncratic art form. She realised her solo for ‘Dramaturgy for a conference #2’ together with her longtime collaborator Jamie Griffiths. The filmmaker, photographer, visual artist and performer is focused on issues of identity, wellness, transparency and colonialism, with exhibitions and performances in Canada, UK, US and EU. Griffith is working with cameras, sound, projections and light, using custom softwares for interactive installations and performances.

The choreographer and art activist Mamela Nyamza from South Africa is formally trained in Ballet. With her work she tackles the classical genre of dance, by deconstructing the traditional methods and logic of ballet and contemporary dance and explores the events of her childhood in the 1980s and cultural traditions, as well as contemporary social grievances surrounding HIV/AIDS, domestic and sexual violence and drug abuse. Her biography as a black African, lesbian mother also flows into her work.

Erna Ómarsdóttir from Island is a dancer, choreographer and rock singer whose works, created with explosive energy, read as a mix of storytelling, absurdity and horror, concertante elements and poetic images. Both as an independent artist and as artistic director of the Iceland Dance Company, Ómarsdóttir has created and directed a number of highly acclaimed works that have been shown worldwide and have received great international acclaim.

Mallika Taneja lives and works out of New Delhi, India. Through performances, installations and curatorial work, she explores questions of gender, solidarity, rest and remembering. She is particularly interested in exploring political possibilities of performative ensembles and the role songs have to play in leaving and gathering traces of people, places and things. Some of her works and collaborative spaces include ‘Be Careful’, ‘Allegedly’, ‘Rest of the Struggle’ and ‘Women Walk at Midnight’. She won the ZKB Acknowledgment Prize for ‘Be Careful’ in 2015 and the ZKB Patronage Prize for ‘Allegedly’ in 2021.

Einat Weizman is a playwright and director working primarily on documentary theatre. Eyal Weizman is an architect, writer, professor of Spatial and Visual Cultures and director of the Centre for Research Architecture at Goldsmiths College, London. His research agency ‘Forensic Architecture’ investigates crimes against humanity.

Matías Umpierrez is considered one of the most innovative theatre directors in Latin America; his projects with his company Plataforma Fluorescente, among others, tend to tread that fine line between theatre and visual art. His works are shown in theatres and museums worldwide, and he has also developed ‘site-specific performances’ in factories in Sâo Paulo and on mountain peaks in the Pyrenees, among other places.

The agency A4VR, based in Düsseldorf, is a European leader for concepts and applications in virtual and augmented reality. Together with A4VR, the first dramaturgy for a virtual conference was designed. 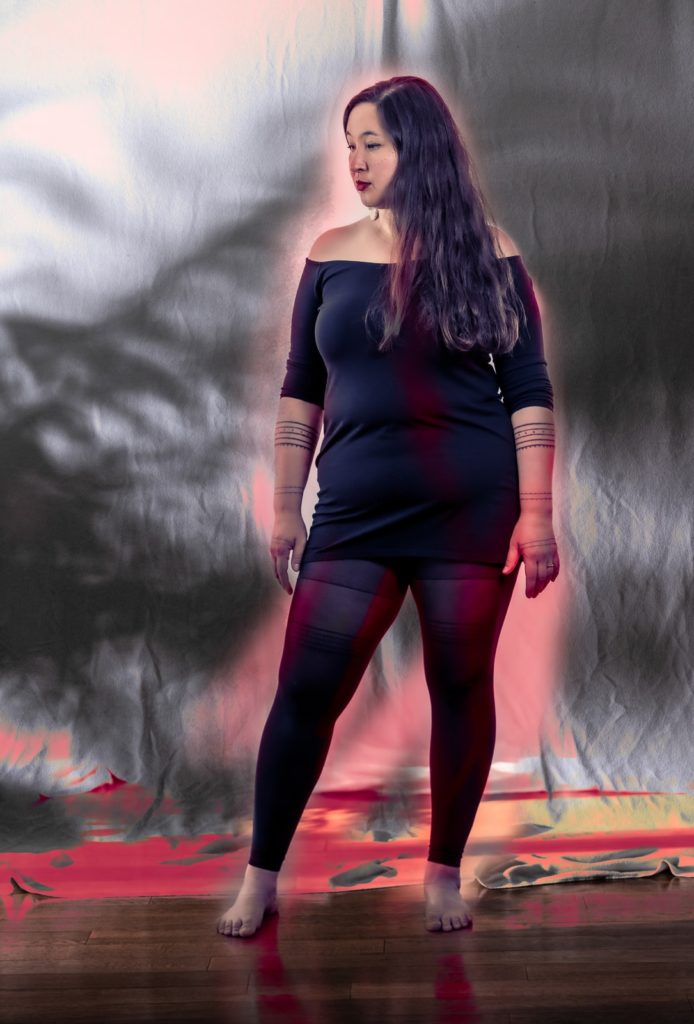 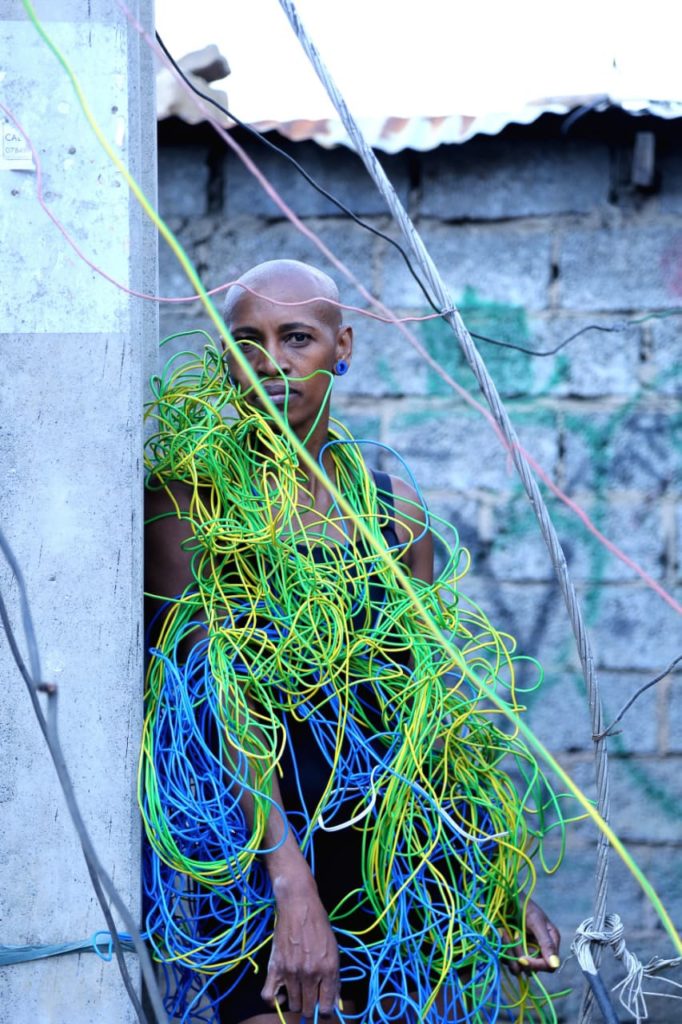 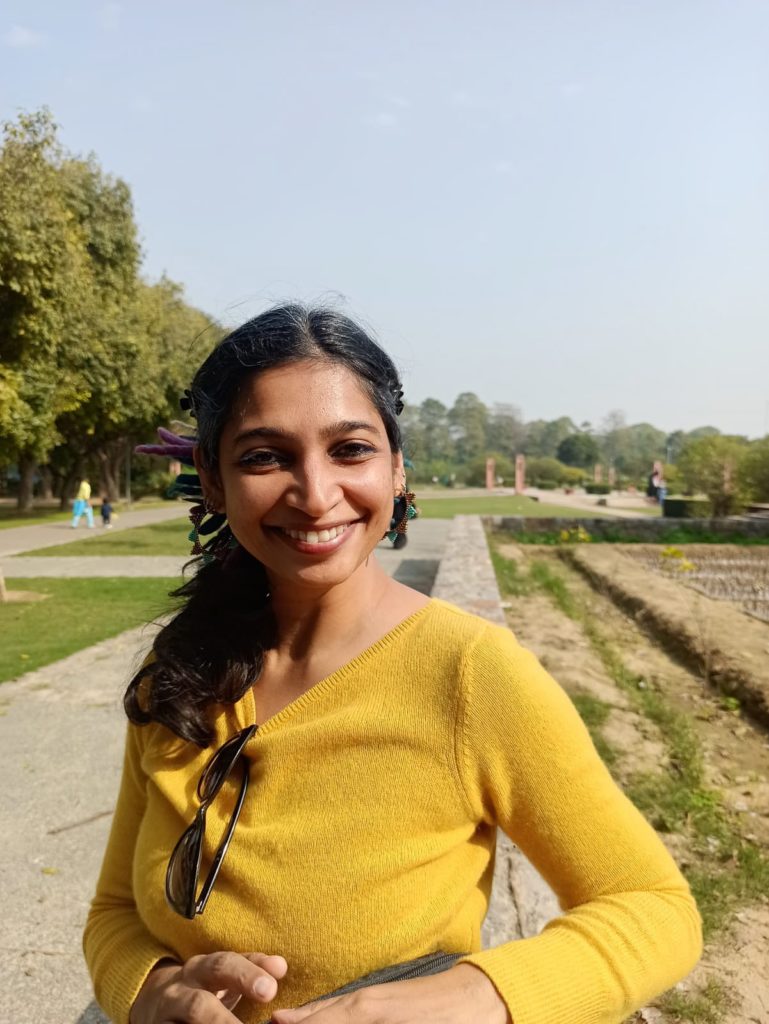 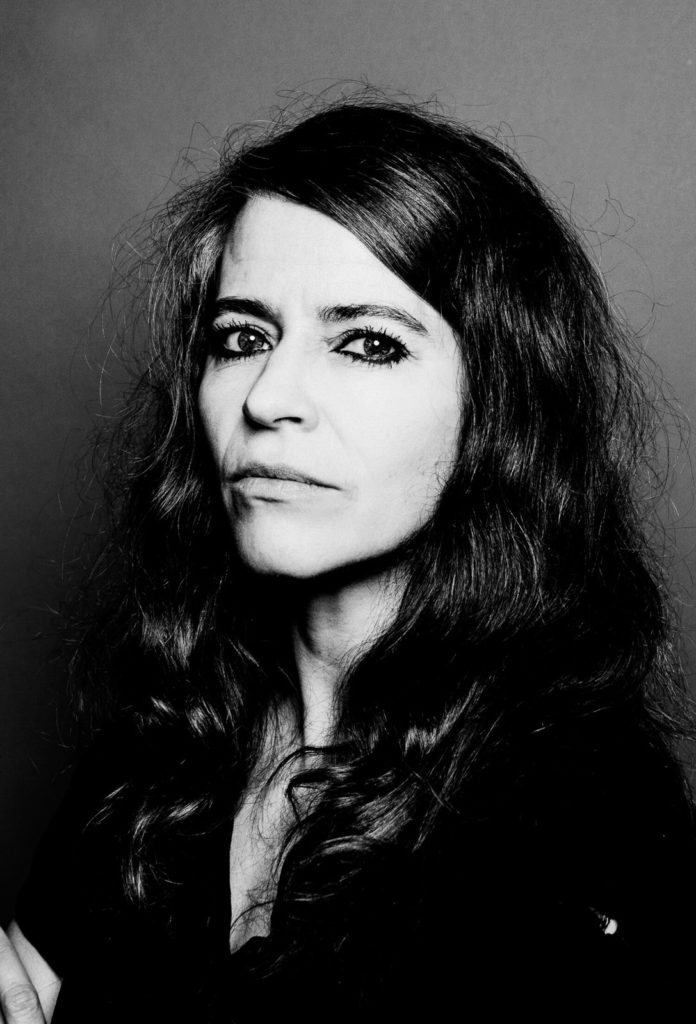 A production of the asphalt Festival in collaboration with the Festival Theater der Welt 2021, funded by the German Federal Cultural Foundation

According to a concept by Matías Umpierrez / Plataforma Fluorescente
Text: Eyal & Einat Weizman

Laakkuluk Williamson Bathory:
The Contamination is Hidden Inside the Ground

I worked with my long time collaborator Jamie Griffiths to create our contribution to Dramaturgy of a Virtual Conference. Our contribution is called The Contamination is Hidden Inside the Ground. In my speech, I juxtaposed the manifesto with the current situation we face here in Iqaluit, Nunavut, Canada with contamination in our drinking water. Many Indigenous communities across Canada suffer from contaminated water. Iqaluit is the largest community in Nunavut and suffers from crumbling infrastructure, all of which has historic, racist and colonial implications. Jamie and I created a 3D dome as the “screen” in which our documents were projected onto. The 3D dome is a scene at the shore in December, when the sea ice is just starting to form in Iqaluit. We planted a “flag” in the ground, that is symbolic of the colours I use to perform uaajeerneq – Greenlandic mask dancing. For me, these colours represent a challenge to convention, usurping colonial power. Colonial power has often been asserted by planting flags in the ground – my anti-colonial flag makes fun of this act. The documents that are projected onto the 3D screen are 2D videos that Jamie created, of the land in conversation with the ocean and with me interacting with the conversation. You listen to my speech as you explore the 3D dome and the 2D videos inside it.

GROUNDED questions the multi-thronged meanings of the expression – it has both negative and positive meanings in our social lives: stability, reliability, moral compass, and self-esteem. But also, it can mean punishment, confinement or segregation and apartness. The work will thus depict a situation of South Africa, where its democracy seems to be in a good working condition, but beyond the surface has small cracks not easy to see, leading to major hazardous and at times, fatal consequences. Nyamza uses wires to symbolise the dichotomy of this ›comfort‹ yet ›cunning‹ situation of her country: dangling, entangled as electrical wires, seemingly not dangerous, but, when one tramples on it by hand or foot, gets a nasty shock that can either be hazardous or deadly. GROUNDEDshows the consequent years of wear and tear of the people’s footing, always looking to walk on the moral compass to organize, manage and improve safety, security, and growth of their livelihoods.

Society organized itself through innumerable generations by defining an active, determining part and a passive, adapting part – a key-lock principle: man and woman. After this principle, the second of the two parts is the one who is subjected and molded by the male hands in the world: The female body as a form to fit around the male shape. In her work, Erna explores the centuries-old understanding of the female role. How has the constant abuse of women or female read persons been written into their bodies? The performance is a try to find an expressive way of presenting the results of this research.

Gestures and moves, going on and on in an endless loop tell the story of an infinitive customization. Hence the work is also about finding a physical language for the untold. The performer multiplied herself into many hers, anyone of her finding her own expression of a new storytelling from the ‘second part’ perspective.

Mallika Taneja:
It Will Come Back to Me

It has been many years since she was lost. For many years after, too many people did not speak of her… to others or to each other. The reason for this is not entirely understood… the only thing that can be said is that perhaps… It was just too difficult. She is entirely absent from the ever growing archive of the world wide web. She exists only in memory of those who were left behind. They too have now forgotten. What they recall now, a first after 28 years, is what was collected here. Fragments of what they recollected have been thrown around for you to find. These are of  varying lengths and have been placed at different spots along the park. They carry many people in them… the one spoken of, the one speaking, the one listening… And then, there are the myriads that will get evoked as you traverse the fragments.

We invite you to take a gentle walk with these voices and visuals, let pieces of them be carried with you and fill the gaps with your own firm and fragile memories.

Special Thanks to Mohammad Hasan Siddiqui from Hertz Studio for his significant contribution to the audio edit. Grateful to Abhishek Mathur, Akshat Nauriyal, Chayan Adhikari & Neo Muyanga for lending equipment and tirelessly talking tech with me and Ruchi Chaudhury for helping understand copyright and left. Sumangala Damodaran and Bindhumalini for sharing their songs. Akshay Thapliyal for his assistance. To the voices in the piece, I am ever grateful for their time, effort and trust.